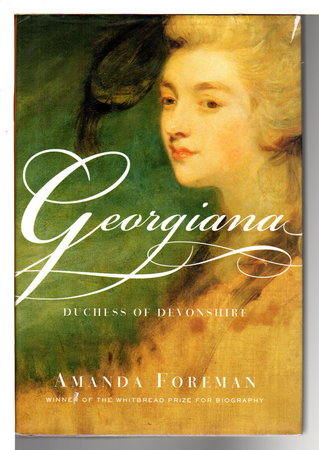 New York: Random House, (1998) dj. Hardcover first edition - A biography of one of the most influential woman in the late 18th century Britain - "In 1774, at the age of seventeen, Georgiana achieved immediate celebrity by marrying one of England's richest and most influential aristocrats, the Duke of Devonshire. Launched into a world of wealth and power, she quickly became the queen of fashionable society, adored by the Prince of Wales, a dear friend of Marie-Antoinette, and leader of the most important salon of her time. . . but Georgiana's public success. . . concealed a personal life that was fraught with suffering. . . For over twenty years, the three lived together in a jealous and uneasy mŽnage ˆ trois, during which time both women bore the Duke's children--as well as those of other men. Foreman's descriptions of Georgiana's uncontrollable gambling, all-night drinking, drug taking, and love affairs with the leading politicians of the day give us fascinating insight into the lives of the British aristocracy in the era of the madness of King George III, the American and French revolutions, and the defeat of Napoleon." Illustrated, chronology, notes, select bibliography, index. xx. 454 pp. Family tree on endpapers. ISBN: 0-375502947.