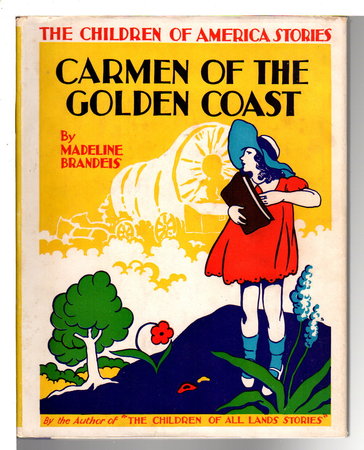 CARMEN OF THE GOLDEN COAST.

New York: Grosset & Dunlap, (1935.) dj. Hardcover first edition - A title in the "Children of America Stories" series. Set on the West coast of the United States, this story of two little girls, each of them living in different worlds, deftly combines fact and fiction to create an engrossing story. In Depression-era America, the Stevens family had to sell their home in Los Angeles and prepare to move in with Great Aunt Carmencita in Seattle. As Carmen is travelling with her parents towards Seattle, with stops all along the way - in San Francisco, Yosemite, Lake Tahoe, the redwood forest, Crater Lake and Portland and the Oregon coast, she reads the diary her great aunt kept in 1850 as a little girl when she and her family had to leave California because the Americans took their rancho from them. Illustrated with photographs. Green and white map endpapers. Bound in glossy white boards with a blue cloth spine and a full color illustration on the front (illustration is repeated on the dust jacket.) and printed throughout on good quality semi-glossy paper. Rear cover of the dust jacket lists the first 11 title in the Children of All Lands series, and the rear flap contains a blurb for Little Rose of the Mesa Original price of 50c on the front flap of dj.160 pp.

Condition: Very near fine in a near fine dustjacket. Just a bit of light foxing on the endpapers and rather uncommon in this condition.