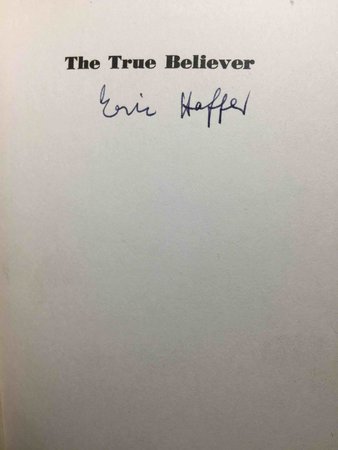 THE TRUE BELIEVER : Thoughts on the Nature of Mass Movements

New York: Harper & Brothers, (1951) dj. Hardcover - "Highly provocative, best-selling analysis of the fanatic - the man compelled to join a cause, any cause - and a penetrating study of mass movements from early Christianity to modern nationalism and Communism. " His first book, one which was immediately recognized as a classic, and one which is still interesting and relevant, more than 60 years after its original publication. SIGNED on the half title page, and very uncommon thus. Notes. 176 pp

Condition: Near fine in gray boards in a fair only dust jacket (price-clipped, chip to bottom edge of front cover, other edgewear)