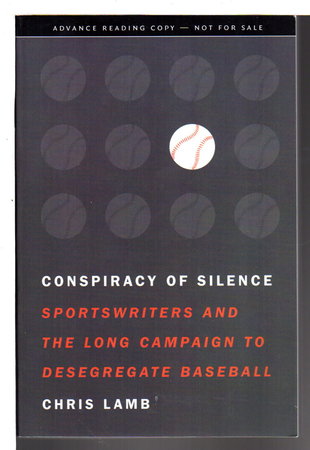 CONSPIRACY OF SILENCE: Sportswriters and the Long Campaign to Desegregate Baseball.

Lincoln: University of Nebraska Press, (2012). First edition - "The campaign to desegregate baseball was one of the most important civil rights stories of the 1930s and 1940s. . . Even today, as far as most Americans know, the integration of baseball revolved around Branch Rickey's signing of Jackie Robinson to the Brooklyn Dodgers organization in 1945. This book shows how Rickey's move, critical as it may well have been, came after more than a decade of work by black and left-leaning journalists to desegregate the game. Drawing on hundreds of newspaper articles and interviews with journalists, Chris Lamb reveals how differently black and white newspapers, and black and white America, viewed racial equality. He shows how white mainstream sportswriters perpetuated the color line by participating in what their black counterparts called a 'conspiracy of silence.' Between 1933 and 1945, black newspapers and the Communist Daily Worker published hundreds of articles and editorials calling for an end to baseball's color line. The efforts of the alternative presses. . constitute one of baseball's - and the civil rights movement's - great untold stories." Notes, bibliography. xiii, 374 pp plus several blank pages.