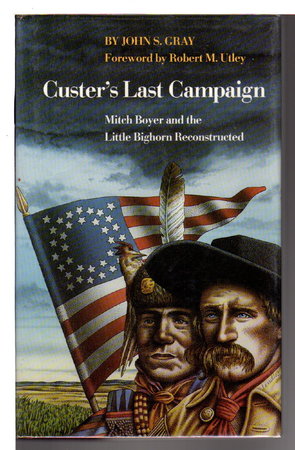 Lincoln: University of Nebraska Press, (1991) dj. Hardcover first edition - An authorative book on this battle - one which uses a totally different focus to interpret the events: "Starting with the shadowy Mitch Boyer, a mixed-blood heretofore known only as the sole army scout to follow Custer into battle and die with him, Gray devotes Part I of the book to filling in the details of Boyer's thirty-nine years preceding the Sioux campaign of 1876 . . . Part II cover the two weeks (June 11-25) during which Boyer served as Custer's key guide and scount." Foreword by Robert M. Utley. Illustrated with photographs, charts and maps. Bibliography, index. xvii, 446 pp. ISBN: 0-80322138X.