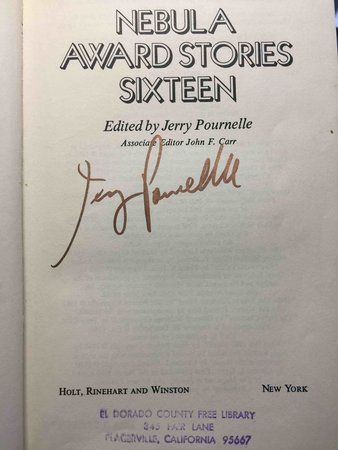 New York: Holt, Rinehart and Winston, (1982.) dj. SIGNED hardcover first edition - The Science Fiction writers of America choices for the best stories of 1980. In addition to stories by P. K. Dick, Gregory Benford and Charles L. Grant, this includes works by Clifford D. Simak, Michael Swanwick, Susie McKee Charnas, and Howard Waldrop . Essays on science fiction by Gregory Benford (who won the Nebula this year for his novel 'Timescape') and by Algis Budrys and Bill Warren. SIGNED by TWO authors - by Pournelle on the title page and by Benford at his essay "Why Is There So Little Science in Literature?" Edited and with an introduction by Jerry Pournelle. Also includes the past Nebula Award Winners from 1965 to 1980 and a list of Hugo winners. 286 pp. ISBN: 0-03-0597870.

Condition: Ex-library with a pocket, usual markings, spine slant and signs of wear, but in a very good dust jacket.