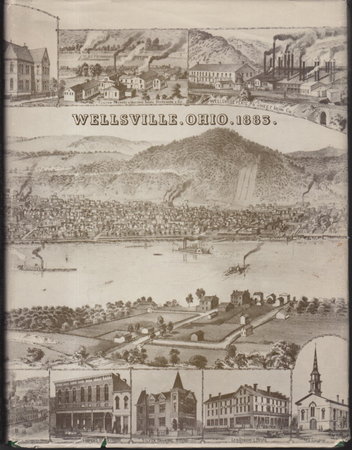 BEFORE THE MEMORY FADES: An effort to capture, record and preserve some of the events past that made Wellsville an important trade and industrial center in early Ohio, 1795 - 1950.

Wellsville, OH: The Wellsville Historical Society, n.d, (ca 1976) dj. SIGNED hardcover first edition - A history of this town on the Ohio River, gleaned in large part from old newspaper archives and illustrated with many old photographs.INSCRIBED by the author on the page with the foreword "To Mrs -- whose husband was a boyhood playmate" and dated in 1979. Illustrated endpapers. Oversized format. 72. pp.

Condition: Fine in green leatherette with gilt lettering in a very good pictural dust jacket which simply states "Wellsville, Ohio, 1883" (some edgewear to the dj)