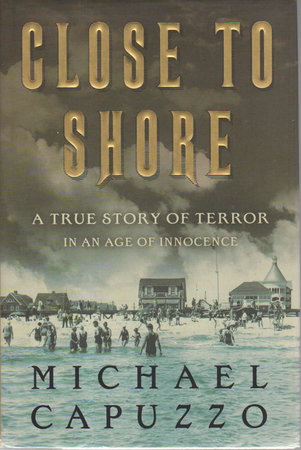 CLOSE TO SHORE: A True Story of Terror in an Age of Innocence.

New York: Broadway Books, (2001.) dj. Hardcover first edition - Fascinating account of the events of the summer of 1916, when a rogue great white shark attacked swimmers along the NJ shore - and even a mile from the coast in a creek - killing three adults and one boy, and leaving another badly injured, triggering mass hysteria & launching the most extensive shark hunt in history. While modern science now tells us that shark attacks are exceedingly rare and limited to just a few species, and it is still undecided on whether or not the concept of a "rogue shark" is accurate, these events helped inspire Peter Benchley's classic novel (and movie),"Jaws" . The story of the shark's attacks is juxtaposed against a picture of America in the late Edwardian age, at the beginning of a period of rapid change, both culturally and technologically, an America not yet committed to participating in the war in Europe, but on the verge. Map, sources, bibliography. Illustrated endpapers. 317 pp,. ISBN: 0-767904133.