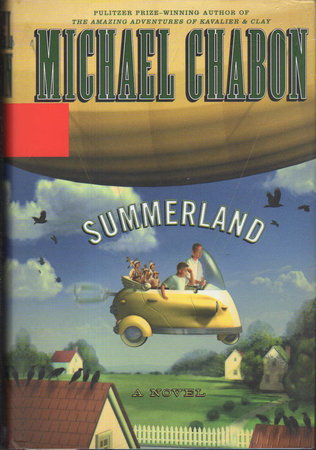 New York: Hyperion, (2002.) dj. SIGNED hardcover first edition - Prize winner author's first novel for children, a fantasy novel which won the 2003 Mythopoeic Fantasy Award. This is the story of "Ethan Feld, possibly the worst ballplayer in the history of the league, as he struggles to defeat giants, bat-winged goblins, and one of the toughest ballclubs in the realms of magic, to save all the Summerlands, and ultimately the world. [Chabon] creates a whole new universe, richly drawn from American folklore, with legendary beings, monsters, and mythical creatures inhabiting a magical landscape where the powers of the past and the future, of good and evil, are locked in grand battle." SIGNED on the title page. 500 pp. Illustrated endpapers. Cover art by William Joyce. ISBN: 0-786808772.

Condition: Very near fine in a like dustjacket (a few small bumps to the bottom edge of the boards)