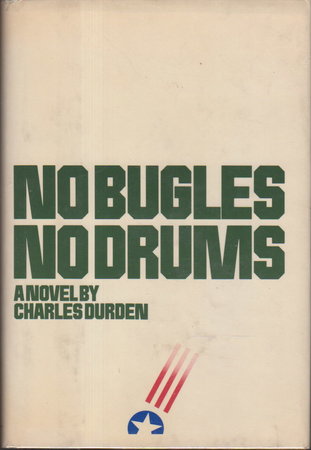 NO BUGLE, NO DRUMS.

New York: The Viking Press, (1976) dj. Hardcover first edition - The author's first novel, set during the Vietnam War - "A sometimes hilarious Catch-22 about a Georgia ""grunt"" stuck guarding a pig farm near Danang. Hawkins and his buddies smoke dope, run a numbers game, smoke dope, run a lottery, smoke dope, smuggle dope, and dope-philosophize (sort of) as they wait for time and the war to pass them by. During off hours, they blow up a South Viet outfit to win the daily numbers (based on the number of dead ARVN) . . . a tale of psychic and moral disintegration--a humorous and at times disgusting charting of the path from cynicism to nihilism." (Kirkus Reviews). ISBN: 0-670-514195.

Condition: Fine in a very near fine dust jacket (hint of toning to cream dj).