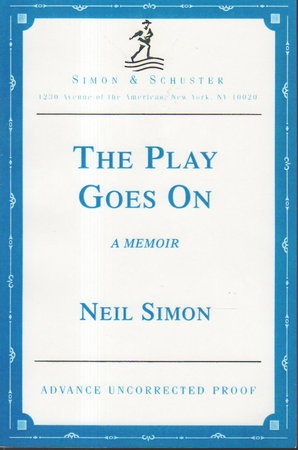 THE PLAY GOES ON: A Memoir.

New York: Simon & Schuster, (1999). First edition - "In this 2nd volume of his memoirs, playwright Neil Simon begins immediately following the death of his wife, Joan. From that moment of unbearable sadness, Simon moved quickly to work on another play to keep himself busy and his mind off his loss. The work was therapeutic, and he met an actress who had a role in his play, Marsha Mason. Almost immediately a bond developed, which led to marriage. When Mason's career required that she be in Hollywood, Simon and his two daughters from his first marriage moved there as well. He immersed himself in his work & created: ''Brighton Beach Memoirs,'' ''Biloxi Blues,'' ''Broadway Bound,'' and ''Lost in Yonkers.'' 329 pp.