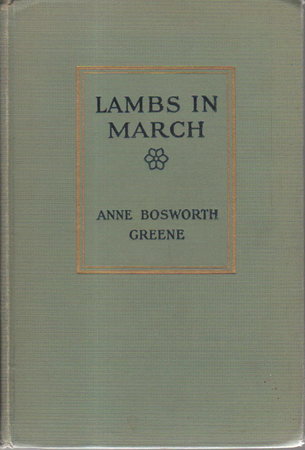 LAMBS IN MARCH and Other Essays.

New York & London: Century Co, (1928). Hardcover first edition - A collection of ten essays, including an account of her childhood in England in the 1880s, others on animals (one of taking their cat on the train with her daughter). Perhaps most noteworthy are two essays on Yosemite (one on sketching there and the other on Clouds Rest) and another called "Attempting Yellowstone." Ironically, considering the fact that several of these essays are about her life as an artist, this is illustrated with small drawings - decorations - by Katharine E Gray and not Greene herself. 274 pp.