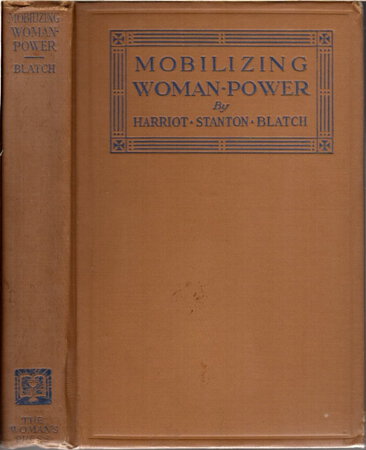 New York: The Womans Press, 1918. Hardcover first edition - The first book by Harriot Stanton Blatch, the daughter of suffragist Elizabeth Cady Stanton, and herself a leader in the woman suffrage movement, a writer and an advocate for labor reform. "She is credited with modernizing a suffrage movement that, by the opening of the 20th century, was listless and flagging," and also with changing it from primarily a middle and upper class women's movement to one which included concern for the rights of working women. "Her radical style combined militant civil disobedience with political activism. The combination of her energy, daring and political savvy spurred the movement on to its goal of enfranchising American women with the passage of the Nineteenth Amendment to the Constitution in 1920." Foreword by Theodore Roosevelt. Although this first book, written during World War I, is a feminist view in favor of war as providing equality of work for women, she returned to the peace movement after seeing the ravages which war had brought to Europe and her second book, published in 1920 was ' A Woman's Point of View, Some Roads to Peace'. Illustrated with a frontispiece and 12 photographic plates - showing women 'comfortably and becoming garbed for working in a factory', pulling a plow in France, with an ambulance equipped with an xray machine set up by Marie Curie, and working in the Erie Railroad workshop. Appendix containing Documents Used in Women's War Work in England and France. 195 pp.

Condition: Very good overall in tan cloth with blue lettering and a decorative frame around the title (some rubbing to the lettering on the spine, corners slightly bumped and worn) Very uncommon, and interesting.