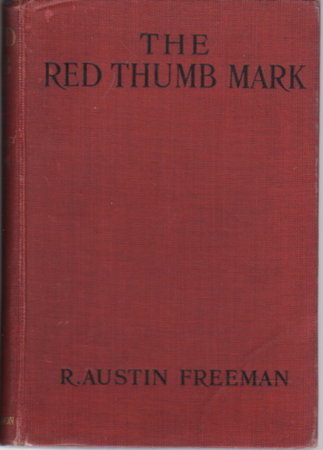 London: Hodder & Stoughton, 1911. Hardcover - Very early edition of the first Dr. Thorndyke mystery (originally published in 1907.) A Haycroft Queen Cornerstone title. In his preface, Freeman comments "In writing the following story, the author has had in view no purpose other than that of affording entertainment to such readers as are interested in problems of crime and their solutions ; and the story itself differs in no respect from others of its class, excepting in that an effort has been made to keep within the probabilities of ordinary life, both in the characters and in the incidents. Nevertheless it may happen that the book may serve a useful purpose in drawing attention to certain popular misapprehensions on the subject of fingerprints and their evidential value ; misapprehensions the extent of which may be judged when we learn from the newspapers that several Continental commercial houses have actually substituted finger-prints for signed initials." 248 pp.

Condition: Very good in dark red cloth with gilt lettering on the spine, black on the front cover.