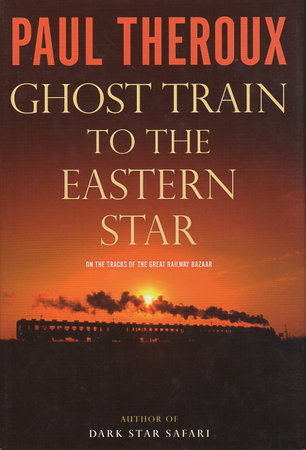 GHOST TRAIN TO THE EASTERN STAR: On the Tracks of the Great Railway Bazaar.

Boston: Houghton Mifflin, 2008. dj. Hardcover first edition - "Thirty years after the epic journey chronicled in his classic work 'The Great Railway Bazaar,' Theroux re-creates his 25,000-mile journey through eastern Europe, central Asia, the Indian subcontinent, China, Japan, and Siberia. . . In the three decades since, the world he recorded in that book has undergone phenomenal change. The Soviet Union has collapsed and China has risen; India booms while Burma smothers under dictatorship; Vietnam flourishes in the aftermath of the havoc America was unleashing on it." 496 pp. Map endpapers. ISBN: 0-618-418873.