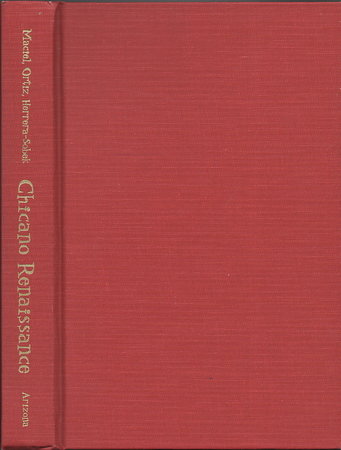 Tucson: University of Arizona Press, (2000.). Hardcover first edition - "Among the lasting legacies of the Chicano Movement is the cultural flowering that it inspired--one that has steadily grown from the 1960s to the present. . . This collection examines changes across a broad range of cultural forms--art, literature, music, cinema and television, radio, and theater--with an emphasis on the last two decades. Original articles by both established and emerging scholars review such subjects as the growth of Tejano music and the rise of Selena, how films and television have affected the Chicana/o experience, the evolution of Chicana/o art over the last twenty years, and postmodern literary trends." Contents include All Over the Map: La Onda Tejana and the Making of Selena by Roberto R. Caldern; Outside Inside-The Immigrant Workers: Creating Popular Myths, Cultural Expressions, and Personal Politics in Borderlands Southern California by Juan Gomez-Quiones; "Yo soy chicano": The Turbulent and Heroic Life of Chicanas/os in Cinema and Television by David R. Maciel and Susan Racho; The Politics of Chicano Representation in the Media by Virginia Escalante; Chicana/o and Latina/o Gazing: Audiences of the Mass Media by Diana I. Ros; An Historical Overview/Update on the State of Chicano Art by George Vargas; Contemporary Chicano Theater by Arturo Ramirez; Breaking the Silence: Developments in the Publication and Politics of Chicana Creative Writing, 1973-1998 by Edwina Barvosa-Carter and Trends and Themes in Chicana/o Writings in Postmodern Times by Francisco A. Lomel, Teresa Marquez, and Mara Herrera-Sobek. Illustrated with photographs, bibliographies or notes at the end of each article. Index. 330 pp. ISBN: 9780816520206.

Condition: Fine in red cloth with gilt lettering on spine (a new copy)