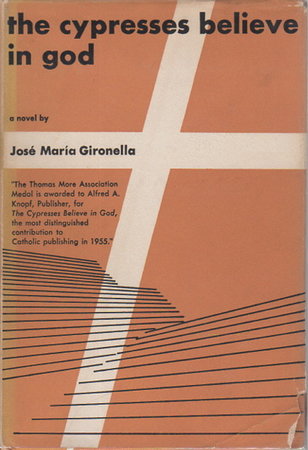 THE CYPRESSES BELIEVE IN GOD.

Edition: 3rd printing of the one volume edition.

New York: Alfred A. Knopf, 1958. dj. Hardcover - The first book in his massive trilogy on the Spanish Civil War, the book upon which Gironella's reputation rests. Deeply Catholic and conservative, Gironella nevertheless attempted to write an even-handed account of that war, and its effect on the Basque Alvear family and on the ordinary people of Catalonia. This novel covers the years leading up to the outbreak of that war. Winner of the National Prize for Literature. Translated from the Spanish by Harriet de Onis. Glossary of persons appearing in the novel. 1010 pp.

Condition: Very near fine in a very good dustjacket. An attractive copy.