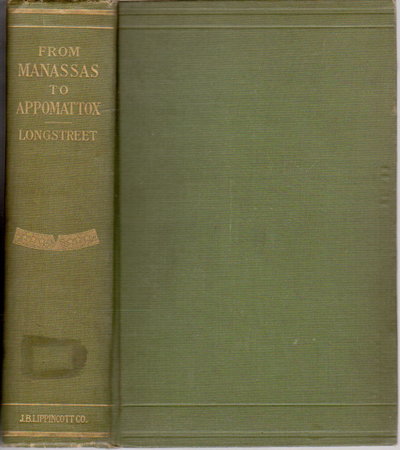 FROM MANASSAS TO APPOMATTOX: Memoirs of the Civil War in America.

Philadelphia: Lippincott, 1903. Hardcover - An important history of the Civil War as told in the first person by one of the great generals in that war. Lieutenant-General James Longstreet began the American Civil War in New Mexico and served with great distinction throughout the course of the conflict. He was commander of the Confederate Army's First Corps, which in its various incarnations fought through most of the major wartime campaigns, and a friend, confidant and close advisor to General Lee. After the war, a clique of former Confederate officers began blaming General Longstreet for the army's defeat at Gettysburg, and this criticism intensified about General Robert E. Lee's death, when he could no longer counter it. Illustrated with 15 portraits, engravings and 16 maps (14 colored) especially prepared for this work. Index. vii, 698 pp.

Condition: Very good in olive green cloth with gold stamping on the spine, top edge gilt (previous owner's name and address stamped, some offsetting on the endpapers, minor wear to covers, but overall a tight and sturdy copy.)