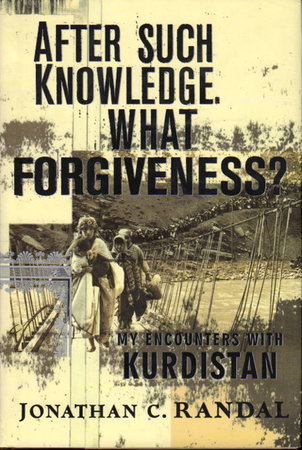 AFTER SUCH KNOWLEDGE, WHAT FORGIVENESS? My Encounters With Kurdistan.

New York: Farrar, Straus & Giroux, (1997.) dj. Hardcover first edition - A firsthand report on Kurdistan by an American war journalist. The account deals with the diplomacy and politics - and betrayals - of the Middle East as the Kurds attempt to achieve autonomy. Randal, with information from Kurdish leaders and diplomats, provides the historical and political background to the internecine wars, the mass migrations and the lifestyle of the nomadic Kurds, the world's largest ethnic group without a state of their own, who are deprived of their oil in one country, their national dress banned in another and their language forbidden in a third country. Notes, bibliography, index. 356 pp. ISBN: 0-374-102007.