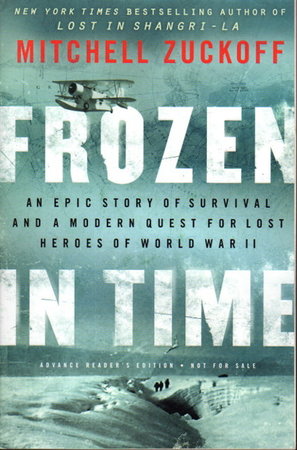 FROZEN IN TIME: An Epic Story of Survival and a Modern Quest for Lost Heroes of World War II.

New York: Harper Collins, (2013.). First edition - A true account of heroism and determination both during World War II and recently: "On November 5, 1942, a U.S. cargo plane on a routine flight slammed into the Greenland Ice Cap. Four days later, the B-17 assigned to the search-and-rescue mission became lost in a blinding storm and also crashed. Miraculously, all nine men on the B-17 survived. With the weather worsening, the U.S. military launched a daring rescue mission, sending a Grumman Duck amphibious plane to find the men. . . [this is an] account of these harrowing crashes and the fate of the survivors and their would-be saviors.. . Moving forward to today, Zuckoff recounts the efforts of the Coast Guard and North South Polar Inc., led by an indefatigable dreamer named Lou Sapienza, who worked for years to solve the mystery of the Duck's last flight and recover the remains of its crew.. . a blend of mystery, adventure, heroism, and survival." Photographs, cast of characters, notes. 372 pp (index to come)