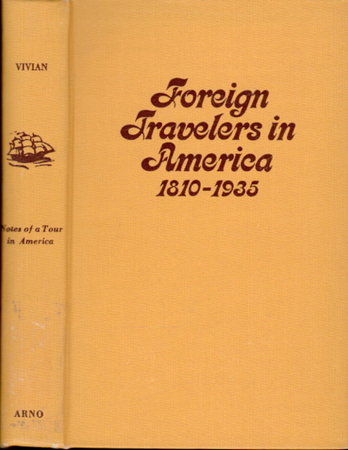 New York: Arno Press, 1974. Hardcover - Originally published in 1878. Folding frontispiece map. The author, a member of Parliament, traveled from Halifax in Nova Scotia, to Boston, New York, Saratoga, etc, and then went across to the Pacific and back on the Union Pacific Railroad, taking in the California sites, including Yosemite. Vivian visited Utah and includes notes on the Mormons and polygamy. As a metallurgist, he devotes a significant amount of attention to the mining districts and the mineral resources of Nevada, Utah and California. Comments on the Chinese questions, frequent statements like loving the "darkies" and preferring "the niggers, etc." A title in the Foreign Travelers in America, 1810-1935 series. iii, 260 pp. ISBN: 0-405-054769.