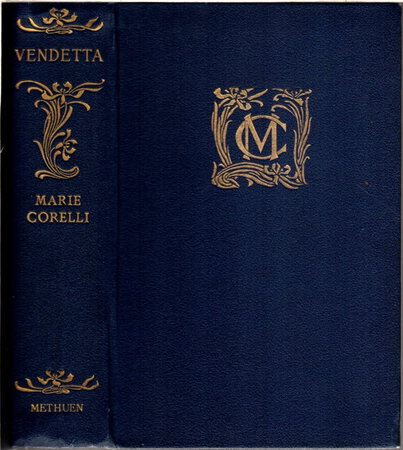 VENDETTA! Or the Story of One Forgotten.

Edition: Later printing (with seventeenth edition on the title page.)

London: Methuen, (1900, c 1886.). SIGNED hardcover - It is interesting to note here that the publisher was unhappy with the sales of this book - the two first printings only sold 656 copies (Wollf p 392) but it continued in print for many more years. The second novel of the most widely read author of her time, and favorite novelist of Queen Victoria herself, set against the background of the cholera epidemic in Naples in 1884. Her melodramatic novels sold more than the combined works of her contemporaries, including Arthur Conan Doyle and Rudyard Kipling, although both her books and her personal life were the subject of frequent controversy. Wolff in Nineteenth Century fiction describes her books as "trashy .. . but they remain interesting as an extraordinary index to extraordinary public taste." and he goes on to quote Henry Miller in 1976 who said her work was "always fascinating and gripping" and Rebecca West in 1928 writing "she had an incurably commonplace mind" but also a "wild lust for beauty" and "demonic vitality." (Wolff pp 282-283)
SIGNED on the half title page with the words "Second Production" referring to this as her second novel. 405 pp plus a 48 pp publisher's catalogue. ISBN: vbf4.

Condition: Near fine in dark blue cloth with gilt lettering (the colors are bright, the corners sharp, the spine straight) Bookplate of Frederick W Skiff of Portland Oregon (1867 Ð 1947), author, noted collector and bibliophile. Signed books by Corelli are quite genuinely scarce, and this has the added appeal of having been part of Skiff's collection.