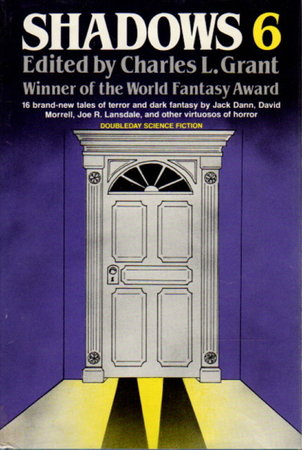 Garden City, NY: Doubleday, 1983. dj. SIGNED hardcover first edition - An anthology containing "16 brand new tales of terror and dark fantasy" including We Share by Lori Allen; Eenie Meenie Ipsateenie by Pat Cadigan; The Appearances of Georgio by Leslie A. Horvitz; The Touch by Wayne Wightman; Sneakers by Marc Laidlaw; Reunion by Jack Dann; By the Hair of the Head by Joe R. Lansdale; Dreams by Elisabeth Erica Burden; Crutches by Steve Rasnic Tem; Cold Heart by Peter D. Pautz; Peppermint Kisses by Jesse Osburn; A Last Testament for Nick and Trooper by J. Michael Straczynski; Mariana by Melissa Mia Hall; The Man with Legs by Al Sarrantonio and The Silent Cradle by Leigh Kennedy; SIGNED by TWO authors at their stories: David Morrell at "But at My Back I Always Hear" and Joe Lansdale at "By the Hair of the Head." Edited and with an introduction by Charles Grant. viii, 180 pp. ISBN: 0-385-182597.

Condition: Ex-library with the usual markings, but overall tight and clean in a near fine and unmarked dust jacket.