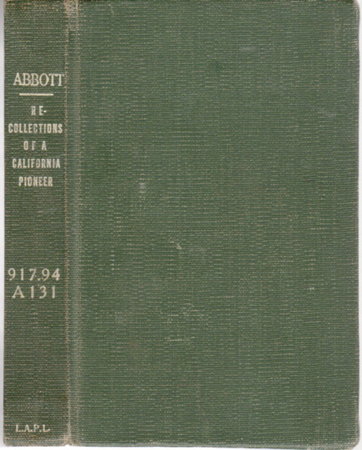 RECOLLECTIONS OF A CALIFORNIA PIONEER.

New York: Neale Publishing 1917. Hardcover first edition - The autobiography of a pioneer who traveled to California at the start of the Gold Rush, written at age 88 during his retirement. Along with his brother, he left Beloit, Wisconsin, on March 3, 1850 and traveled along the Platte River through South Pass to Salt Lake City, where the company disbanded, although he continued across the desert to the Carson River and Mormon Station. He spent several months of mining at Volcano above Yankee Slide on the American River. After returning to Wisconsin, and back again to California, he leased a ranch at Point Reyes, and eventually wound up in Tombstone Arizona in an "attempt to recoup his fortunes." He failed at mining, gave up on ranching, and was impoverished by a risky railroad venture, but he wrote an valuable and entertaining account of the overland journey and of life in Gold Rush California and afterwards. Frontispiece portrait. 235 pp.