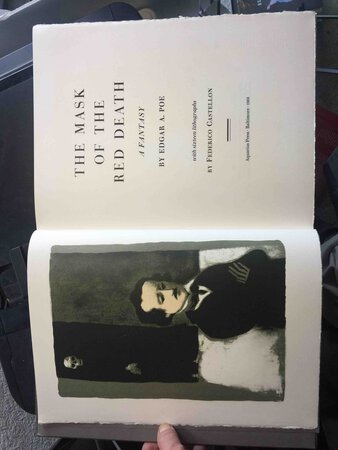 THE MASK OF THE RED DEATH: A Fantasy by Edgar A. Poe with sixteen lithographs by Federico Castellon.

Baltimore: Aquarius Press, 1969. SIGNED hardcover first edition - A beautiful production, the first publication of the Aquarius Press. Number 132 of 500 copies (of a total of 525) SIGNED on the colophon page by Federico Castellon. Illustrated with sixteen colored lithographs by Castellon. From the colophon: "The text is set as it appeared in the first edition, published in Graham's Magazine in 1842.. . The lithographs were drawn on the stones by Federico Castellon and printed under his supervision at the Atelier of Edmund and Jacques Desjobert in Paris, France, on Rives BFK paper, in 1968. The book is designed by Bert Clarke and the text set in Monotype Walbaum and printed by Clarke and Way in New York City. The binding is by The Russell Rutter Company." Bound in textured brown cloth with a black cloth spine, gilt lettering on the spine and narrow gilt bands, gray endpapers. In the publisher's brown paper-covered slipcase, with matching gilt titling on the spine. 65 pp plus final lithograph and colophon.

Condition: Very near fine in a very good slipcase (one corner slightly bumped, slipcase has a little paper loss at the base of the spine.)