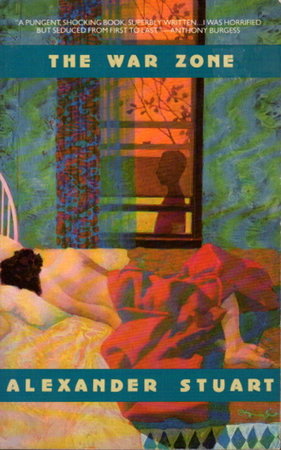 New York: Bantam, (1990.). Screenwriter's very highly praised second novel: Anthony Burgess stated "The War Zone is a pungent, shocking book, superbly written.I was horrified but seduced from first to last." A controversial novel, this was awarded the prestigious Whitbread Prize, but the award was revoked when on judge complained of its treatment of incest. Basis for the 1999 film of the same name which was Tim Roth's directoral debut (and for which Stuart wrote the screenplay) and which one reviewer called the best movie of 1999, praising it for its incredible daring and its brutal but honest portrayal of the subject of sexual abuse and incest. Like the movie, this book is perhaps too honest to be "commercially sucessful" but it is a well-written book about an often unrecognized but devasting "war zone" - that is, inside a seemingly happy family. 210 pp. ISBN: 0-385249535.

Condition: Near fine in glossy illustrated wrappers (usual light toning to the pages.)