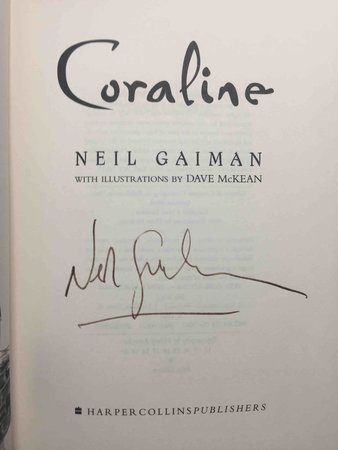 New York: Harper Collins, (2002.) dj. SIGNED hardcover - First young adult book by Gaiman and winner of both the Hugo and Nebula awards for best novella. "In Coraline's family's new flat are twenty-one windows and fourteen doors. Thirteen of the doors open and close. The fourteenth is locked, and on the other side is only a brick wall, until the day Coraline unlocks the door to find a passage to another flat in another house just like her own. Only it's different." SIGNED on the title page by Gaiman. Illustrated with black and white drawings by Dave McKean. 162 pp. ISBN: 0-380-977788.