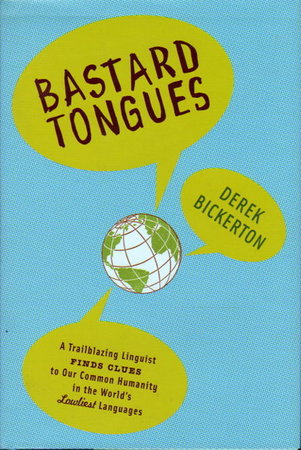 BASTARD TONGUES: A Trail-Blazing Linguist Finds Clues to Our Common Humanity in the World's Lowliest Languages.

New York: Hill & Wang, (2008.) dj. Hardcover first edition - A book which "focuses on languages so low in the pecking order that many people don't regard them as languages at all - Creole languages spoken by descendants of slaves and indentured laborers in plantation colonies all over the world. . . Bickerton has spent more than thirty years researching these languages on four continents and developing a controversial theory that explains why they are so similar to one another. . . a unique blend of memoir, travelogue, history, and linguistics primer." Double page map, glossary, index. suggested reading. 270 pp. ISBN: 0-8090-28174.