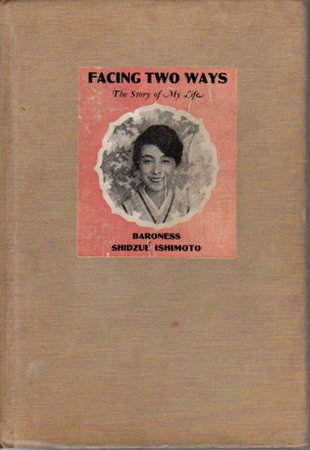 FACING TWO WAYS: The Story of My Life.

New York: Farrar & Rinehart Inc., (1935). Hardcover first edition - The memoirs of an 20th century Japanese feminist and one of the first women elected to the Diet of Japan. She was best known as a pioneer in the birth control movement and a strong supporter of labour reform. Born into a family of samurai, she married a young baron at an early age, and they began their life together at the Miike coal fields in Japan and she witnessed first hand the hardships endured by the miners. In 1922, she was Margaret Sanger's guide during her first trip to Japan. Illustrated with photographs in black and white. 373 pp.

Condition: Good only in beige cloth with an illustrated pasted on label on the front cover, and a title label on the spine. (fraying to the sides of the spine, other wear.)