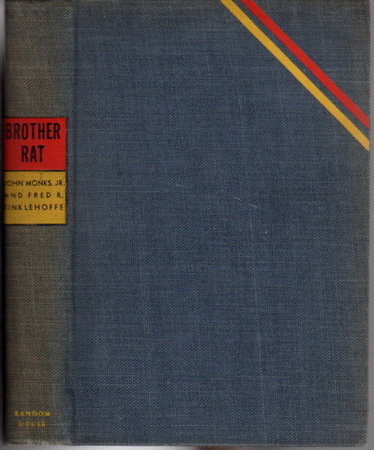 New York: Random House, (1937.). SIGNED hardcover first edition - A comedy set at the Virginia Military Institute, later made into a movie featuring Ronald Reagan, Jane Wyman (they met while filming this) and Eddie Albert (reprising his Broadway role in this, his first movie appearance.) Introduction by George Abbott. This copy is warmly INSCRIBED by both authors: "To Dick - You may be a wonderful fellow and a great [unclear] but remember 'it'll get you every time' Johnny & Fink." Underneath is written, in ink, Richard Murphy, presumably the Academy Award winning screenwriter who collaborated with Monks on several films.

Condition: Near fine in blue cloth with red and yellow diagonal stripes on front cover, panels on spine, lacking the dust jacket.