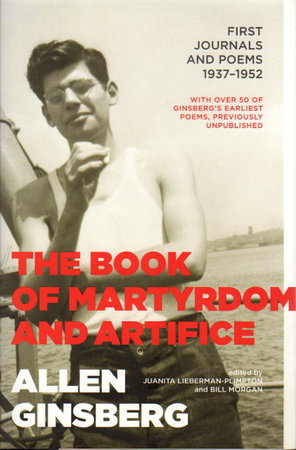 THE BOOK OF MARTYRDOM AND ARTIFICE: First Journals and Poems, 1937-1952

New York: Da Capo Press / Perseus Books Group, (2006.) dj. Hardcover first edition - Edited by Juanita Liebermann-Plimpton and Bill Morgan, these journals "cover the most important and formative years of [his] life. During this time. . . he met Jack Kerouac and William S. Burroughs, both of whom would become lifelong friends and significant literary figures in their own right. Ginsberg's journals--so candid he insisted they be published only after his death--also document his complex relationships with other figures of Beat lore as Carl Solomon, Lucien Carr, and Herbert Huncke... He reveals a growing self-awareness about himself, his sexuality and his identity as a poet." Illustrated with black and whte photographs from Ginsberg's private archive. An appendix of over 100 of Ginsberg's earliest poems, includes over 50 previously unpublished. Index. xviii, 523 pp. ISBN: 0-306-814625.