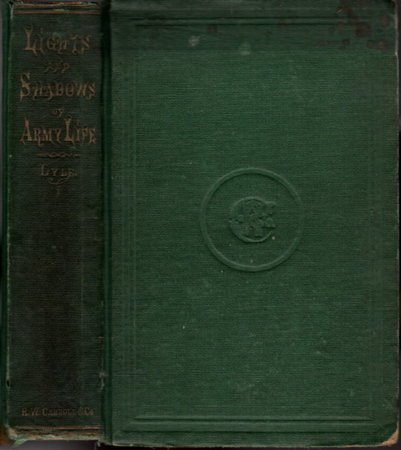 LIGHTS AND SHADOWS OF ARMY LIFE: or, Pen Pictures from the Battlefield, the Camp, and the Hospital

Cincinnati, R. W. Carrol & Co., 1865. Hardcover first edition - When Lyle first came to America in 1848, he immediately joined the hated abolitionists and at the time war broke out, he was the pastor of a prominent anti-slavery church in Troy, Ohio. In 1862, 862, he received the commission of Chaplain in the Eleventh Ohio Infantry, and remained with that regiment until it was mustered out at the close of its three years' service. The regiment saw hard service in Western Virginia and was afterward transferred to the Army of the Potomac, under Gens. Pope and McClellan, participating in the second battle of Bull Run and in those of Frederick, South Mountain and Antietam. Having also studied the medical profession as an avocation, Lyle was doubly useful as an effective helper in taking care of the wounded, Lyle was consequently recognized officially in this capacity and was placed on field hospital work through the remainder of the service from the time of the battle of Bull Run. This book contains a vivid first hand account of the many battles he was present at, as well as discussing the needs of the soldiers- both spiritual and physical. xii, 403 pp, plus 4 pp publisher's ads

Condition: Good overall in original embossed green cloth - some fraying to the ends of the spine, rubbing to the lettering, other shelfwear, offsetting to the title page and some very light scattered foxing. Pages are supple, binding is still sturdy and book is easily readable.