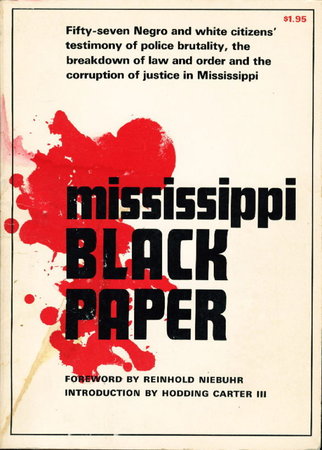 New York: Random House, (1965.). First edition - "Fifty-seven Negro and white citizens' testimony of police brutality, the breakdown of law and order and the corruption of justice in Mississippi." Includes a foreword by Reinhold Niebuhr, and an introduction by Hodding Carter III; Contains first person accounts and affadavits of police brutality toward civil rights workers, people attempting to register to vote, NAACP members holding a meeting, young Blacks walking down the street, integrated groups arrested on trumped-up criminal charges - all the everyday dangers of life in Mississippi during the 1960s. These 57 were chosen out of over 250 affadavits obtained for a suit brought against Sheriff Rainey. 92 pp plus the foreword and introduction by Hodding Carter III. Graphic photograph of police brutality by Frederick deVan on preceding and following the text.