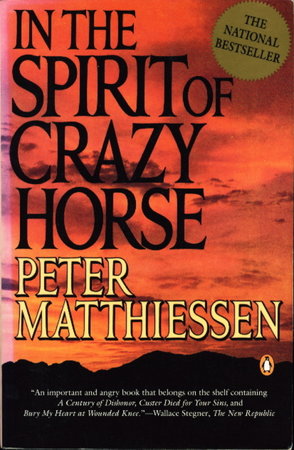 IN THE SPIRIT OF CRAZY HORSE.

New York: Penguin, (1992.). A detailed examination of the American Indian Movement and the shoot-out with the FBI near Wounded Knee in 1975, which resulted in the death of one Indian and two agents, and the incarceration of native American activist Leonard Peltier. This book also gives a history of the years of struggle between the Lakota Indians and the US government, as well as discussing the traditional Indian beliefs of the sacred inviolability of the earth, and it examines how the expansion of mining onto Indian treaty land might have affected events. Finally, Mattheiesen presents new evidence supporting Peltier's claims of innocence, arguing for a new trial. When this book was first published in 1983, it was suppressed and pulled from shelves and only finally reissued, in a somewhat revised form, in 1991. Afterword by Martin Garbus in which he discusses the attempts to censor this book by filing libel suits. Three maps, notes, index. xli, 646 pp. ISBN: 0-14-0144560.

Condition: Near fine in in illustrated wrappers (spine slightly faded.)