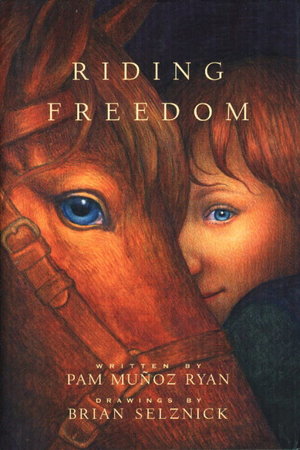 New York: Scholastic, (1998.) dj. Hardcover - Novel for older children based on the life of the legendary Calfornia stage coach driver known as One-Eyed Charley and Six-Horse Charley, but whose real name was Charlotte Parkhurst (under the name of Charles Parkhurst, she was also the first woman to vote in California . ) Illustrated with black and white drawings by Brian Selznick. Her route was over Mt Madonna near Watsonville, and the ranch she owned was near what is now Freedom Road there - 138 pp. Winner of Parenting Magazine's Reading Magic Award for 1998's Most Outstanding Children's Books and The San Francisco Chronicle's Best Books of 199 8; nominated for the 1999-2000 California Young Reader Medal and the North Dakota Flicker Tale Award. ISBN: 0-590-95766x.

Condition: INSCRIBED on the title page 'To .... Hold tight to the reins and your dreams.' and dated in 1998, the year of publication. Fine in fine dust jacket