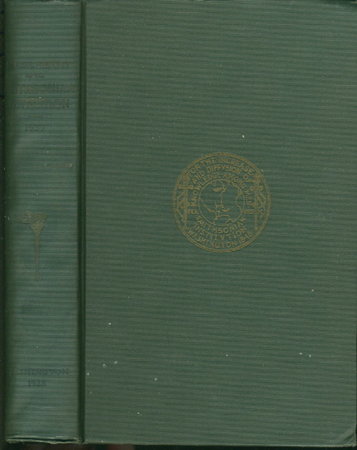 ANNUAL REPORT OF THE BOARD OF REGENTS OF THE SMITHSONIAN INSTITUTION Showing the Operations, Expenditures, and Condition of the Institution for the Year Ended June 30 1927.

Washington, D.C.: United States Government Printing Office, 1928. Hardcover first edition - In addiiton to the annual reports of the various departments and museums that make up the Smithsonian Institution, this includes many articles on scientific discoveries and natural history, with a focus on modern astronomy the evolution of 20th century physics;. Incuded are articles on Isaac Newton by Professor Albert Einstein; the nucleus of the atom; the centenary of Augustin Fresnel; the coming of the new coal age; geologic romance of the Finger Lakes; fossil marine faunas as indicators of climactic conditions; paleontology and human relations; at the North Pole by Lincoln Ellsworth; soaring flight (gliding) by Wolfgang Klemperer, bird banding in America; the distribution of fresh-water fishes; the evidence of man's bearing on evolution; the origins of Chinese civilization; archaeology of China; Indian villages on southeast Alaska; the interpretation of aboriginal mounds by means of Creek Indian customs; Friedrich Kurz, artist-explorer; note on the principles and process of X-ray examination of paintings; lengthening of human life in retrospect and prospect; Charles Doolittle Walcott; William Healey Dall; and more. Illustrated with many plates, including one fold-out plate and one in color, as well as numerous entexte figures, maps, and charts.Index, xii 580 pp.

Condition: Very good in dark green cloth (rubbing to the lettering on the spine, but a sturdy and clean volume.)