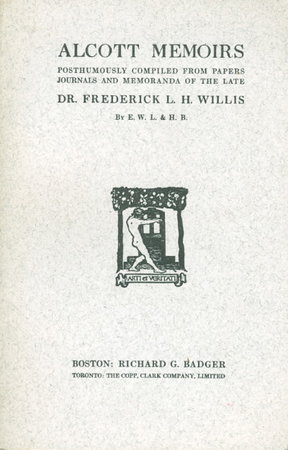 Pottsdown, Penna: The Americanist Press, (1967.). One of only 200 copies of this facsimile edition of an account originally published posthumously in 1915. The memoirs were compiled by Willis's daughter, Ellen Willis Linn, who wrote the prelude, and by Henri Bazin. who added a postscript. The Prelude begins "So much has been written of the famous men and women of New England whose lives compassed approximately the years 1800 to 1870, that little if anything remains to be told. No pretense is here made to supply such deficiency if it exists. This little book aims at naught else than a presentation of a personal point of view wherein alone lies whatever of a personal point of view wherein alone lies whatever of originality it may contain." Willis was rumored to be the model for "Laurie" in "Little Women". In addition to writing about the Alcott family, Willis recounts briefly his meetings with Emerson, Thoreau, Hawthorne, Margaret Fuller and Thomas Starr King. 108 pp.