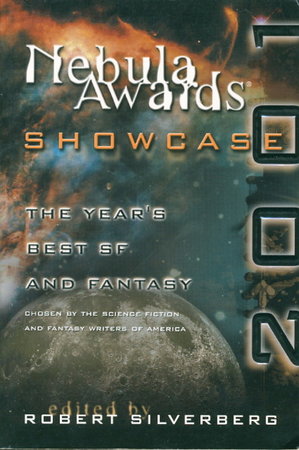 NEBULA AWARDS: SHOWCASE 2001 (VOLUME 35): The Year's Best SF and Fantasy Chosen by the Science Fiction and Fantasy Writers of America.

New York: Harcourt, Inc., (2001.). SIGNED first edition - Contains the complete award-winning texts by Ted Chiang, Mary A. Turzillo, Leslie What, and Octavia E. Butler (an excerpt from her novel The Parable of the Talents); a report on the field by Gary K. Wolfe, an early story by 2000 Grand Master Brian W. Aldiss; and 2000 Author Emeritus Daniel Keyes's account of how he wrote 'Flowers for Algernon.' and more. SIGNED by Michael Swanwick at his story 'Radiant Doors." Introduction by Robert Silverberg in which he looks back wryly at Damon Knight, the beginnings of SFWA, and the first Nebula banquets ("the food was terrible." xv, 252 pp. ISBN: 0-15-6013355.