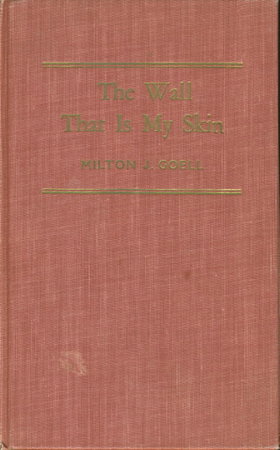 THE WALL THAT IS MY SKIN.

New York: Wendell Malliet and Company, 1945. SIGNED hardcover first edition - Simple but rather appealing collection of poems by this New York lawyer "inspired by the Negro's Fight for Democratic Rights" as well as by experiences during World War II where men of every color fought in the Armed Forces. Although the foreword by Hall Johnson refers to Goell as having been born "with a silver spoon" these poems show his sincerity and his close identification with those suffering discrimination - for example, one long poem begins "I am a Negro - thirteen million strong." SIGNED on the front endpaper. 41 pp

Condition: Very good in terra cotta cloth with gilt lettering (some rubbing to the lettering), lacking the dust jacket.