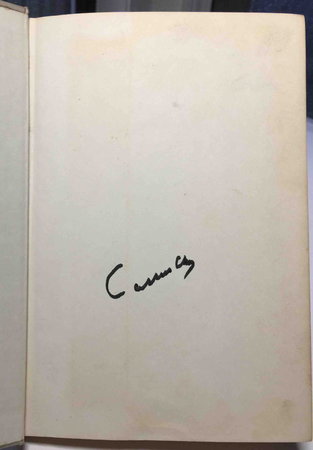 New York: Fleet Publishing Corporation, (1964.) dj. SIGNED hardcover first edition - SIGNED by the book's subject with his birth name, "Cassius Clay" -- a rare signature and especially so in this rather hard-to-find book, the first published biography of the great heavyweight champion. Issued later in the same year in which Clay took the heavyweight crown away from Sonny Liston (in their February 1964 bout), the book includes an account of the turbulent months that followed -- including the new champ's relationship with Malcolm X and his conversion to Islam, the controversy over his draft status, his much-publicized trip to Africa, and his suspension by the World Boxing Association (in effect as the book ends), which delayed his rematch with Liston until May 1965. Illustrated with 8 pp of photographs. Includes his professional boxing record. 116 pp.

Condition: Good only in a good dustjacket (bumped at several corners, also bumped and dented at bottom center of front cover - hard enough to have created a short split in the board; jacket is price-clipped and has several ragged tears and associated creasing along the bottom edge of the front panel, along with internal tape repairs.