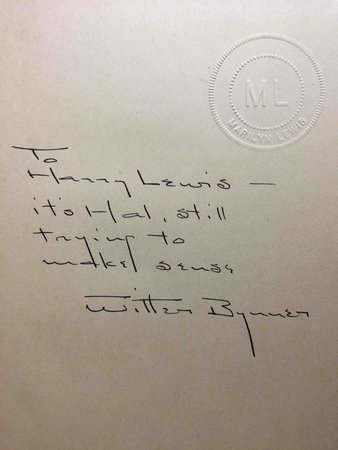 TAKE AWAY THE DARKNESS.

New York: Alfred A. Knopf, 1947. dj. SIGNED hardcover first edition - A collection of mostly lyric poems, in many different moods, which is reflected in the inscription by Bynner on the front endpaper. "To Harry Lewis, it's Hal, still trying to make sense." An interesting association copy with the embossed seal of Harry's wife, Marilyn Lewis also on the front endpaper. While Harry was also an actor, he and Marilyn are best known for their influence on the restaurant scene in Hollywood. In 1950, they opened the first "Hamburger Hamlet" on Sunrise Boulevard to a crowd packed with Harry's actor friends, including Tony Curtis and Sammy Davis, Jr. In addition, Marilyn had a couture clothing line, and dressed such notables as Nancy Reagan, and produced the award winning Showtime film "The Passion of Ayn Rand." 176 pp.

Condition: Near fine in a fair only dust jacket (edgewear to the dust jacket, with the loss of a piece ranging from about 1./2 to inches at top of spine).