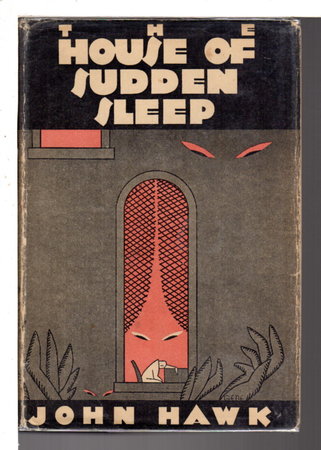 New York: The Mystery League, Inc. , 1930. dj. Hardcover first edition - Mystery featuring assistant district attorney Rodney Colt. One of several titles issued between 1930-1933 in this interesting publishing experiment. From the back cover: ''The Mystery League, Inc., is a publishing house formed after many months of careful study, through the co-operation of the United Cigar Stores Company of America and affiliated companies to supply the self-evident, nation-wide demand for the best in books of mystery and detection, at a price never before attempted in publishing history for NOT REPRINTS, BUT NEW WORKS NEVER BEFORE PUBLISHED IN THIS COUNTRY. . . This, the Third Selection, is by the well known John Hawk, and is the only new book by this author to ever sell, except in reprint editions, for less than $2.00.'' Perhaps because the country was in the midst of the Great Depression, this venture failed, despite the low price of 50c and the attractive bindings and dust jackets. Notable for the striking art dec dust jacket illustration by "Gene" (Eugene Thurston) 288 pp.