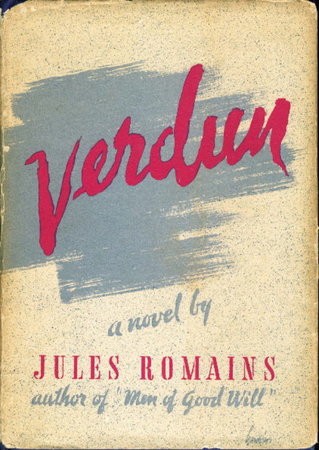 VERDUN: The Prelude; The Battle (Men of Good Will, Volume VIII, Eight.)

New York: Alfred A. Knopf, 1939. dj. Hardcover - Although published in France as part of the 'Men of Good Will' series (Les Hommes de Bonne Volunte), the introduction emphasizes that this can be read and understood as a separate novel. Translated from the French by Gerard Hopkins. Includes a Dramatis Personae at the beginning of the book, to introduce the reader to the characters who appeared in previous volumes plus an index of characters at the end of the volume. xii, 500 pp. Map endpapers.

Condition: Very good in blue cloth in a fair only dust jacket (rubbing to the folds, loss of about 1 cm at top of spine.) BOMC brochure laid in.