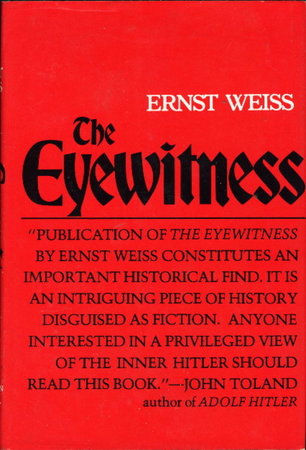 Boston: Houghton Mifflin, 1977. dj. Hardcover first edition - A novel concerning the psychiatric treatment of A.H (a young Adolf Hitler) who, after being cured from hysterical blindness resulting from mustard gas in World War I, sees his purpose as leading a defeated Germany back to glory. The author was a doctor, and a close friend of Franz Kafka, who fled to Paris in the 30's and then committed suicide when the German's conquered France in 1940. He wrote this book in 1939, and it was first published in Germany in 1963 as fiction, but new evidence has been suggested that this is not fiction, but based on actual accounts. Comment on the front cover from John Toland who calls this an 'important historical find. An intriguing piece of history disguised as fiction.' 206 pp. ISBN: 0-395-253365.

Condition: Fine in a near fine dust jacket. (tear at top of spine of dj.)