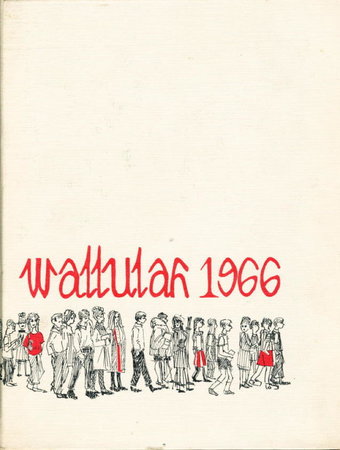 Salem, Oregon: Willamette University 1966. Hardcover first edition - Although glancing at the photographs in the yearbook for this small liberal arts college, gives the sense of a tranquil and unchanged student life (one still dominated by the sorority and fraternity system), historian G. Thomas Edwards in his 2008 essay 'Student Activism at Pomona, Willamette, and Whitman, 1965-1971' notes that "TodayÕs student generation has little comprehension of small college activism of 1965-1971 that revitalized their institutions. No other period of modern collegiate historyÑat small as well as large schoolsÑhad such a long lasting impact. These formative years included the end of traditional parietal rules, the appointment of students to influential committees, the emergence of the pervasive counterculture, the decline of Greeks in numbers, and academic reforms. In summary, activists spearheaded major changes at the three small colleges in a period of about six academic years. No other time period in collegiate history has experienced such meaningful and long lasting results. TodayÕs colleges reflect the profound changes brought about by activists in the sixth decade of the twentieth century. Photographs throughout. Large format. 222 pp. plus Index.

Condition: Very good in white boards with red lettering and black and red illustration (spot to back cover.)