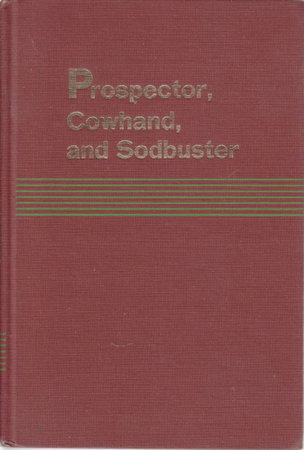 Washington, D.C.: United States Department of the Interior / National Park Service, 1967. dj. Hardcover first edition - From the foreword: "Between 1803 and 1853, the new seaboard republic of the United States acquired a vast empire of plains, mountains, and deserts west of the Mississippi River. Its borders fixed on the Pacific, it gloried in its new stature as a continental Nation. But most of the new domain lay unconquered and unknown except to scattered Indian tribes and a few explorers and mountain men. In the next half-century, soldiers, traders, road and railway builders, and other adventurers helped fill in the map of the American West. Overshadowing them all in actually subduing the land, however, were the prospector, cowhand, and sodbuster. Though these three types of pioneers fostered exaggerated stereotypes that still live in American folklore, each shared decisively in shaping the history of the West. And each left tangible evidences of his passage across the land that recall for today's generation the contributions of frontier mining, stockraising, and farming to the making of America. This volume surveys the legacy of historic sites and buildings bequeathed by these actors in the drama of conquering the West." Color frontispiece of a painting by Charles Russell, illustrated throughout with black and white photographs and maps. Notes, suggested reading, index. xii, 320 pp. Map Endpapers.

Condition: Near fine in brown cloth with gilt lettering, no dust jacket as issued.