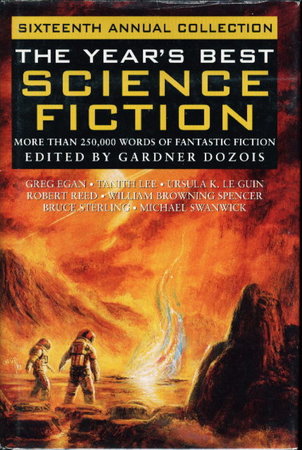 New York: St Martin's, (1999.) dj. SIGNED hardcover - SIGNED by three authors: by Dozois on the title page, by Robert Charles Wilson at his story 'Divided by Infinity' and by Michael Swanwick at his story 'The Very Pulse of the Machine.' One of the best and most significant anthologies of modern science fiction, with works by established prize-winning writers and newcomers to the field. Also included in this volume are stories by Greg Egan, Tanith Lee, Ursula K. Le Guin, Robert Reed, William Browing Spencer, Bruce Sterling, and others, along with the editor's annual summary of the year - 1998 - and his list of Honorable Mentions. Cover advertises'more than 250,000 words of fantastic fiction'. lix 609 pp. ISBN: 0-312209630.