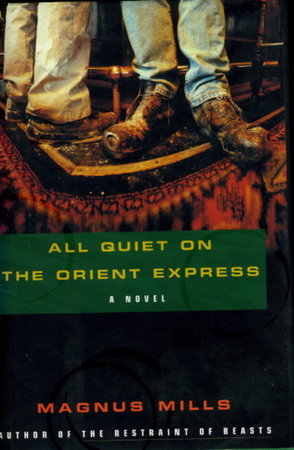 ALL QUIET ON THE ORIENT EXPRESS.

New York: Arcade Publishing, (1999.) dj. Hardcover first edition - His second novel, following the Booker Prize and Whitbread Award finalist debut novel 'The Restraint of Beasts' (which Thomas Pynchon called it "A demented deadpan-comic wonder.") From the front flap: "Told with insidiously beguiling deadpan charm [this is] the story of a hapless odd-jobber - our narrator - watching the dregs of summer run out in a campground in England's Lake District, and waiting to set off for the East. Quiet, unassuming, hardworking, he doesn't seem like the adventurous type, but traveling to the Orient has always been his dream - something to think about when you're eating beans out of a can and staring at the campfire. When the owner of the campground offers him a small painting job, our hero thinks it would be rude to refuse." 211 pp. ISBN: 1559704950.