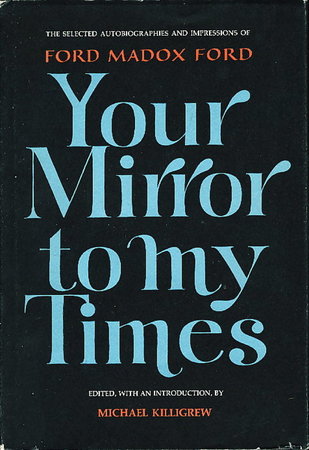 YOUR MIRROR TO MY TIMES: The Selected Autobiographies and Impressions of Ford Madox Ford.

New York: Holt, Rinehart and Winston, (1971.) dj. Hardcover first edition - An "autobiography" fashioned from eight volumes of Ford's memoirs by Ford, selected, edited and with an introduction by Michael Killigrew. A prolific writer himself, Ford was also at the forefront on the literary world from the early 20th century until his death in 1939 - he was the nephew of Dante Gabriel and Christina Rossetti, he was in Paris with James Joyce, Gertrude Stein, Hemingway and others.
Sources. xxi, 392 pp. ISBN: 0-03-0859719.