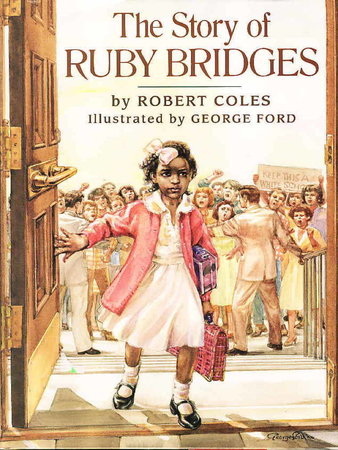 THE STORY OF RUBY BRIDGES.

New York: Scholastic, (1990.) dj. Hardcover - The moving story of a 6 year old black girl who became the first to integrate Frantz Elementary School in New Orleans in 1960. 'Ruby Bridges was born in a small cabin near Tylerton, Mississippi. - We were very poor, very poor, - Ruby said. - My daddy worked picking crops. We just barely got by. There were times when we didn't have much to eat.' . Illustrated in full color by George Ford. Large format, unpaginated. Laid in is a photocopy of a newspaper article about Robert Cole, in which he recounts how Ruby Bridges changed his life. ISBN: 0-590-578214.